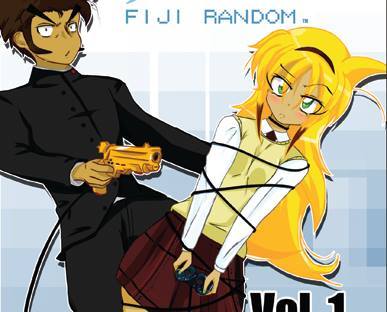 SAW is a main character in the Fiji Random manga (look he is on the cover). His full name is Savage Angel Watagashi. SAW is a nickname. His name was inspired by the stupid movie franchise with the same name. He comes from an island country, Razor Island, that is notorious for being dangerous and crime ridden. SAW is part of a foreign student exchange program. Guess what happens to SAW in this program? Correct, he will end up with Fiji’s family in the first volume. Because of his roots and his love of blades, Saw is feared among his peers. He develops a crush on Fiji’s best friend Koco, but Koco is super afraid of him. OH NO!

SAW is tough with a strong defensive attitude. He gets nervous when talking to pretty women, and is kinda mean to women he finds unattractive. SAW’s not perfect by any means, but he is not the monster that people assume he is… or is he? Maybe the students of River Pulse High School will learn a thing or two after meeting him.

SAW’s design has been changed from his initial creation. Long story short, his hair was improved and his eyes were reworked.

Needless to say he will not get along with Fiji well, but that makes a great dynamic. Fiji and SAW fight throughout the manga series in humorous ways, like siblings.

Dark skinned boys are even rarer than dark skinned girls in anime/manga so I’m very excited about this character. He is an important member to the diverse cast of Fiji Random.

View all posts by stalebeef